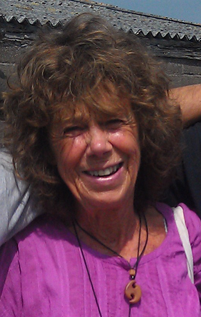 Circle Dance exploded into my life in 1982. It was then known as Sacred Dance. The thread of the Dance that I took hold of that May afternoon at Hawkwood College in Stroud, led me to the Findhorn Foundation in Scotland, where the Dance originated. I took all the Sacred Dance courses available there, culminating in the training for would-be teachers.

Having established a fortnightly group near Stroud, I then trained for three weeks in Holland on an intensive with Friedl Klocke-Eibl, who had trained with Bernard Wosien, the Master who brought the gift of the Dance to Findhorn in the mid '70s. I had the privilege of dancing with him the last time he visited Findhorn before his death - a peak experience in my life!

In the following years I gave more and more of my time to Circle Dance, until it was a full-time occupation. I have felt strong guidance in all of this and knew very early on that if I committed to this work I would be 'looked after' and that has been so - my life has been, and still is, sustained physically as well as spiritually by the Dance!

Over the years I have run many regular groups in Gloucestershire, England, and in Glastonbury, as well as giving danceshops in France, Greece, Sweden, Germany, Norway, Canada, the States, Iceland and Britain also introductory training courses for people wishing to teach the Dance. 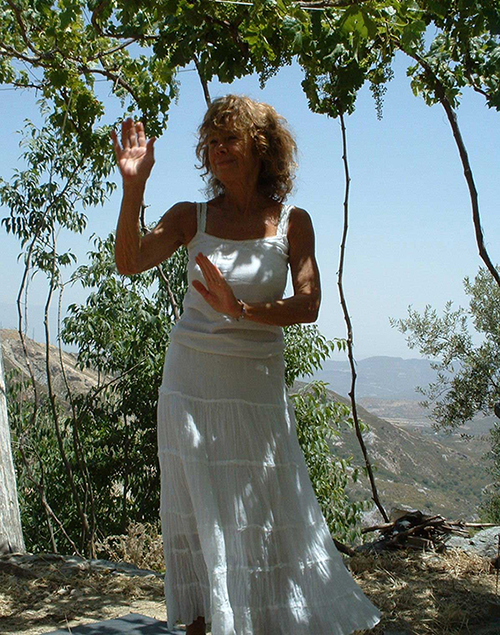 After gaining a BA.Hons. degree in Drama and English Literature at Bristol University. I trained at the Bristol Old Vic Drama School, which led to wide experience in repertory theatre, T.V. and films, culminating in two years with the Royal Shakespeare Company in Stratford-on-Avon, London, and on tour in the States, Japan and Australia. In my time with them I played Bianca in 'The Taming of the Shrew', Phoebe in 'As you Like it', and had six exciting months as part of their small touring unit performing in schools, colleges, Arts Centres etc. with direct audience contact and participation. I also have a Certificate in Drama Therapy.

Later, when my children were small, I trained in Natural Beauty Therapy and Massage and practised both in salons and privately at home, as well as running Higher Education classes at Stratford-on-Avon College, in Personal Care, Social skills, and lecturing in Advanced Level Theatre studies which included practical drama work and production.

My dance events usually have a theme. In the past I enjoyed exploring the 'marriage' of other disciplines with the Dance. I have linked the Dance with myth, story telling, drama, Shiatsu, Psychosynthesis, Runes, and dream work etc., sometimes with another facilitator but usually on my own.

My particular focus used to be the relationship of the human with the natural world, and the re-awakening to the sentient beings of the Earth - the devas, angels, fairies - and how to work in harmony with them. I still journey consciously with the cycle of the seasons and the eight festivals of the year;- with the four sun stations of the Summer and Winter Solstices and the Spring and Autumn Equinoces, and the four cross quarter days, the reflective Earth/Moon festivals - Imbolc, Beltane, Lammas and Samhain, and the dancing will still always have awareness of the cycles of the Earth, Moon and Sun, and of the non-physical world. 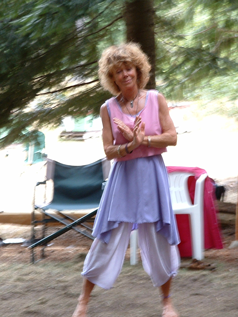 I do occasionally still start without a theme and allow one to emerge from the workshop. This will evolve as the dancing and the group energy evolves, and will frequently emerge during the times of sharing within the circle. Now, however, my focus is predominantly on dance as energy, and how when we dance energy moves through and around the body, how energy can be raised, and how playing with the juxtaposition of the different energies of the dances can bring balance.

I also run training workshops working with committed dancers to deepen their understanding of what lies behind and beyond the steps, explore meaning and symbolism and experience the levels on which the Dance operates.