Sacred Circle Dance is a living tradition, growing and moving with the times. The collection of dances that Bernhard Wosien originally took to Findhorn included some of his own choreographies. We are living at a pivotal point in the human story and while there are universal themes that are applicable to all people at all stages of evolution, I feel there are specific issues and energies of the present time to be expressed. Dances are therefore continually being created from the experiences and needs and yearnings of now, and often to the music of now. So circles dance to a variety of music styles - pop, reggae, synthesised, meditative and classical music in addition to the ethnic folk music.

Although I talk of choreographing the dances attributed to me, it feels rather that they come to me. The first arrived sometime in 1984/5, there are now over 100. These dances fit into two main categories. There are the ones that ‘drop in’ from somewhere ready-made and complete, and there are the ones that need work. The inspiration to ‘create’ a dance usually comes from the music - I hear something that I just have to dance to. Much less frequently it is the other way round; I feel a need to express something in movement and a dance will come for it, the music not until later. Salmon, for instance, came to life in Canada in the summer of 1994 –but it was months before I heard the perfect music for it!

With the dances in the first category I have no memory afterwards of having done anything. The steps just danced through me as if the dance already existed in the ether waiting for the right music and an available body. These are the most satisfying while, paradoxically, giving me the feeling that I had nothing to do with their birth. White Bird comes into this category, so do Dolphin, Hex, Return of the Unicorn, Between the Worlds, Greensleeves, Sunburst, Sacred Hoop, Daring, Salmon, Cloud of Unknowing, Vision Quest, Shadows, Fearless, Firewalking, Insider, Toroya, Tree of Life, and the new ones, Imagine and Stella Maris.

White Bird was the first to arrive. The steps describe, first, the form of a bird, the Dove of peace, wings outstretched; with the travelling steps the bird flies then settles again, as if alighting on a branch. Looking at this on a subtler level - the dancer stands, at the beginning, at the centre of an equal-armed cross, and the steps first honour these four directions, looking at each and acknowledging all the strands of life from the peace of the centre. In this place of stillness everything is reconciled and integrated, and only when this is done do the steps lead out and into the world. It is the left foot that leads, so the inspiration for the movement out comes from the non-rational, intuitive centre. The steps finally come to a close and the dancer centres once more, rising and falling on the heels and settling into a moment of containment and inner peace.

I taught this dance at the Findhorn International Sacred Dance Festival at Bernhard Wosien's last visit to Britain, and a Spanish woman who was there was able to tell us what the words mean:

I want them to bury me
Like my ancestors
In the dark and cool belly
Of an earthenware pot.
When life loses itself
Behind a curtain of years
Loves and disenchantments
Will live forever

These words felt somehow appropriate to the dance (or the dance to the words), but I couldn't quite tell why at the time, except perhaps that I recognised the theme of peace was both in the dance and in the song. In the song, it is the peace of death, meaning going beyond illusions, masks and attachments to the peace within, which matches the steps.

Pieter Brabers, a Circle Dance teacher originally from Holland, brought it all together - peace, doves and earthenware pots - in his rich and fascinating article in The Grapevine, Winter 91/92. This is what he discovered:

"The Dove in ancient times was the sacred bird of the Mother Goddess, especially Aphrodite. So we have the Goddess as life giver - hence the sacred bird symbolising love-making (Turtle Dove), and the Goddess as life taker - the peace of death (Peace Dove). (I see the Dove here as the soul returning home, to the Mother.) Later, when patriarchy had taken over, the Dove became the symbol of Sophia, the feminine face of God, and still later Christianity adopted the Dove as the sign of the Holy Ghost.

So we have two aspects of the triple Great Goddess - the Creator and the Destroyer. What of the Mother, the Preserver of life? In ancient times earthenware pots were used for two purposes, storage of food and drink (grain, seeds, oil, wine) and as grave jars for burial. The music of White Bird (Vasija de Barro) comes from Ecuador where the people have, for thousands of years, buried their dead in earthenware pots - as they have in many other places, including Greece. These pots symbolised the Mother, the Earth, the womb which contained the seeds of the harvest for the new cycle, which fed the people, and to which they returned at death to await reincarnation. So the peace of Vasija de Barro is not only the peace of death but also the peace in life from being in harmony with the natural cycles."

What a lot buried in an eight step dance! 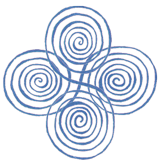 Hex is another dance that dropped in ready-made from the Cosmic Choreographer. When I heard Mari Boine Persen's amazing music my body instantly began to move to it, I just knew how to dance this music - I'd always known! The dance came through a dreamlike consciousness, as if I'd had a brain by-pass. A year or so later I was told the movements are the same, or very similar, to the dances of the Inuit and Sami shamans. (The singer, Mari Boine Persen, is Sami, from Northern Scandinavia). It certainly didn't come from me but rather through me. It seems to be possible to step aside and simply be a conduit, an Earth point, and so tap into other realities, into the collective memory bank, higher consciousness or whatever. Or is it that there is a wisdom and a knowing in the body which, when the linear brain, the personality and the conditioned reflexes move out of the control room, is free to emerge, to express and create? Both I feel sure are true, probably they are the same, certainly the one interweaves with the other.

With Dolphin, Salmon and Return of the Unicorn I had the extraordinary experience of being danced by these creatures. I was a dolphin, a salmon, a unicorn and they gave me the dances. It was awesome to know how it feels to be a dolphin in the freedom of the ocean or a leaping salmon, and to feel their power, sleekness and muscle in my body - or mine in theirs! Quite breathtaking too to be a unicorn and feel that sacred white purity and joyful innocence in my body.

In the second category the dances don't just happen, they need conscious creating; they require work. ("That's the right step for part A, but four times through will leave me on the wrong foot for part B so...?"). The way in, however, is the same for all dances - I just let my body move to the music and feel how to express it. The left-brain will then kick in to solve the problems. 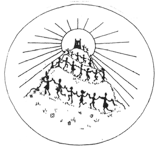 The two dances Greensleeves and Shadows came as a new departure for me, which I found exciting. They are both intensely personal in the sense that they came out of a deep need to express what was happening in me and in my life at the time. Greensleeves came in the middle 90’s from a yearning for union. It erupted from a place of isolation and separation and from a desire to reunite with - the Divine? - The Beloved? – lost parts of myself? It was certainly a cry and a dance from my soul.

Shadows in the early 90’s came out of a lengthy and tacky disentangling from a long relationship, and a time when I knew I was projecting my shadow onto this former lover. Out walking late one afternoon in bright sunlight, I began to move with my huge shadow on the grass, playing with her, rejecting her and finally accepting and embracing her. It was a moving and healing experience, as I still find the dance to be today. A couple or so years ago however the ‘meaning’ in the dance changed for me and so when next I taught it I said nothing of its origins or meaning. At the end I asked the circle how it was for them and for each it had been profound, but also a very unique, personal experience. That is one of the magical things about these Circle Dances – the way they speak individually.

Finally I have found this process of birthing a dance to be organic. Push too hard and it will not be perfectly formed, it may even be stillborn. It happens when it will, so there have been long stretches of time with nothing forthcoming – like a long deep winter sleep - but then from out of the blue, or rather from out of the dark, in its own time there may come another little shoot of creativity! A dance just will not be hurried, forced or 'done', it will emerge only when the time is right and when I am ready. What a humbling process it is! 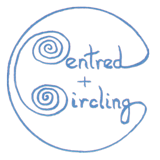 The rest I leave to Great Mystery, with gratitude for being of service in this way and for all the learning I receive from such an absorbing creative process.